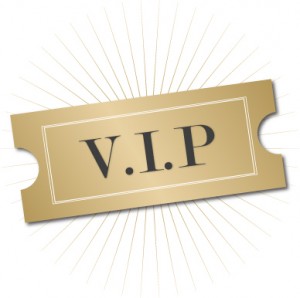 The nightclub business is a trendy business. Through some unknown criteria, the masses decide which club is “happening” on a particular day of the week. Some clubs will be the rage on Mondays but be total duds on Tuesdays. This is the case even if the club plays the same music on both the days.

The owner of the nightclub wants to change all that. He starts a marketing campaign
The result of the campaign is quick. Some people who came on Wednesday come to the club on Fridays too. Many who couldn’t come, gave away the VIP pass to a friend. Within 2 weeks itself, the nightclub was jam packed on Fridays too. to pack the nightclubs on Fridays. On one particular Wednesday, they start giving away a VIP pass. The pass is as big as a credit card and offers free admission to two people before 10 P.M. on a Friday night. Without the VIP card, people would have to pay $5 cover charge.

By enforcing the 10 P.M. deadline on the VIP card, the nightclub made sure people came to it before they thought of going to any other nightclub and the people who would come in a bit late would already find the nightclub crowded and feel it’s “happening”.

°    Make your current customers bring their friends to your store. The nightclub did this by offering free admission to two people on one VIP card. You could give a bonus to a person if she brings a friend with her.

°    A crowd generates a bigger crowd. Make your store seem busy to attract more people. One lawyer made her secretary put every call on hold for at least 5 minutes even though he was free doing nothing. Soon, people thought he is busy and thus  must be good.  Make people perceive that you are in demand. And you will find that your demand actually increases.